Collaborative partnerships are defined as mutually cooperative relationships that work to create, and make active, ecosystems for the effective development of smart city services and infrastructures. Partnerships are, in theory, useful to cities in supporting them overcome budgetary and resource limitation, and stakeholders can include local governments, research institutions, private eenterprises (start-ups and SMEs), citizens, and other cities. Several leading cities have established their smart city policies to facilitate collaborative partnerships as a driving force to increase synergy in developing smart city services and infrastructure. Effective collaboration fosters innovation and agility in resource development: for example, the impetus to share data from IoT sensors with other city departments stems from valuing collaboration in driving service evolution.

One of the main incentives for city governments to adopt collaborative partnerships when developing a smart city is ‘funding and financing’. The size and level of smart city development depends on stakeholders’ involvement with financial sponsors. Clearly, funding has the potential to be a critical success factor in smart city projects; and, on their own, levels of investment may be taken to signify a city’s commitment both to its own provision and to the idea of PPPs. Analysis of funding sources for the development of services in the 31 cities under review revealed that 51.3% of infrastructure services and innovative projects were publicly financed, 36.6% were financed by the private sector, and 12.1% were funded by PPPs. These figures reveal a slight rise in the share of public-private partnership in the smart city space from the 2019 Smart Cities Report. One possible cause is that straitened finances (caused by COVID-19) led cities to look for alternative development funding. As city administration and public safety have become higher-priority issues for city government, publicly driven smart city development is offering itself as a solution in extending universal provision. Smart services promise to bridge the digital divide by using 4IR technologies to bring services to vulnerable groups. 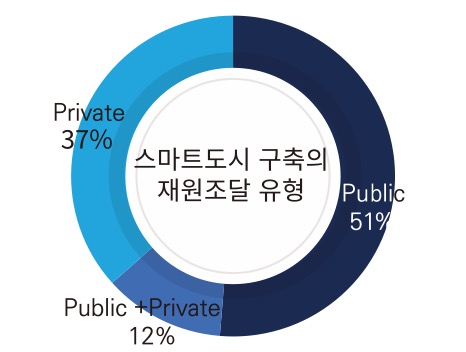 This report found that several cities in the Asian region have a greater proportion of their smart city developments funded through public sources. Seoul ranks highest in the ratio of public financing, having services fully funded and financed by the city itself, followed by Moscow (79%), Shanghai (70%) and Singapore (64%). These cities have mainly developed app- and web-based services, infrastructure services and innovative projects that seek to effect a digital transformation of city government or administrative, meaning that services are intended to work seamlessly at a high level of infrastructural integration. For example, public call centers and interfaces with service users have been transformed by some city governments using AI-based chatbot technology. E-voting on city initiatives using blockchain has been set up, and forms of functionality have been developed allowing users to engage new city initiatives. Last, Smart-ID cards enable the secure verification of users’ digital identities, underpinning services like the provision of driving licenses. In Seoul, most services connected to transportation, energy, the environment, and health were paid for entirely out of municipal coffers; some of these, such as the Seoul ETAX system (set up to facilitate e-tax payments) and online complaint systems, have been widely adopted by citizens. Further, the Seoul Citizen Card, a representative use-case in integrating access to all public facilities, including libraries and public services, was developed under a purely public aegis using the city’s funding. Like the Seoul Wallet App, which provides blockchain-based MyData public services, the card grants access to municipal digital services and handles multiple complex registration processes at once, including applications for City Development loans, and recording moving-in and moving-out dates on public databases. A similar service was found in Moscow, granting access to public services and transportation facilities in the city. Singapore has tapped its own financial reserves to implement innovative infrastructural pilot projects such as smart streetlights and autonomous buses. Shanghai also has a high ratio of publicly financed smart city services, such as digital access to pre-school education, digital libraries, and the provision of culture and arts information. Further, the major public-led projects the city was pursuing included network broadband, data transaction centers, and a new IOC.